Compac Industries recently added 160m³/hr of compressor capacity to its CNG dispenser testing facility, the interesting feature of this being the use of recycled natural gas, as well as the taking of 2 second hand, 3 stage machines and turning them into one 2 x 2 stage machine.

Testing CNG dispensers for accuracy can be done by Master meter or weigh scales. Compac prefer to use weigh scales for the highest possible accuracy. A dispenser is used to fill a bottle and the bottle weight is compared to the dispenser metered weight. A rack of four bottles enables four fills to be done per hose at different flow conditions. Compac have two sets of four vehicle cylinders, enabling a dual dispenser to be tested without delay. The full bottles are then drained into a buffer set of storage bottles, which are connected to a regulator panel that feeds the new compressor gas at 20bar. 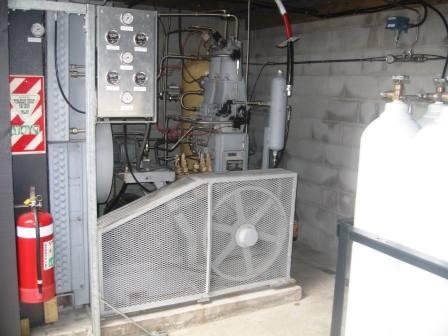 Prior to the commissioning of the 20 bar inlet, 160m³/hr, 30kW compressor recycling  at Compac was done using a 0.35 bar inlet, 30kW,  4 stage compressor pumping 40m³/hr.  Dispensers can now be tested concurrently all day without delay. Some days, up to 12 dual hose dispensers are tested over an 8 hour period - a figure impossible to achieve with the smaller unit.

Finding a suitable machine for the test bay was difficult. The largest motor that could be used was 30kW due to the available power. Taking gas at an inlet pressure of 15 to 20bar meant that only two stages of compression were required. The problem was solved using two old Norwalk 30kW, 3 stage, 1 bar inlet compressors. The first stages were removed and thrown away and the double acting second and third stage of machine two were put onto machine one.

The increased test compressor capacity has been beneficial to Compac and their customers, enabling them to process and deliver large CNG Dispenser orders on time, during which the customer is invited to come to New Zealand and view testing of their dispensers first hand.